Above the Gigafactory 4 – are you allowed to fly there?

Elon Musk brings a lot of excitement to Brandenburg with his major project. In summer 2021, the new Tesla SUV “Model Y” will be produced on the treadmill. An ambitious plan, suitable for Elon Musk.

For this purpose, Gigafactory 4 will be built in Grünheide in Brandenburg. A gigantic car factory in the middle of a 300-hectare forest. About 90 hectares are to be cleared by the end of February.

The clearing began on Thursday. Just the following Saturday, the Higher Administrative Court (OVG) Berlin-Brandenburg stopped the machines. The Green League Brandenburg had filed an appeal. Forty hectares of forest have already been cleared in the few days.

Definitely an exciting topic to watch from the air. Many pilots from the region have been on-site to get their own exclusive pictures.

We will show you when you are allowed to use your drone in the Gigafactory 4 area and how our Map2Fly tells you what you have to watch out for.

The flight over the Gigafactory 4

The major project extends over the area shown below. It is located in Grünheide on the A10 southeast of Berlin. 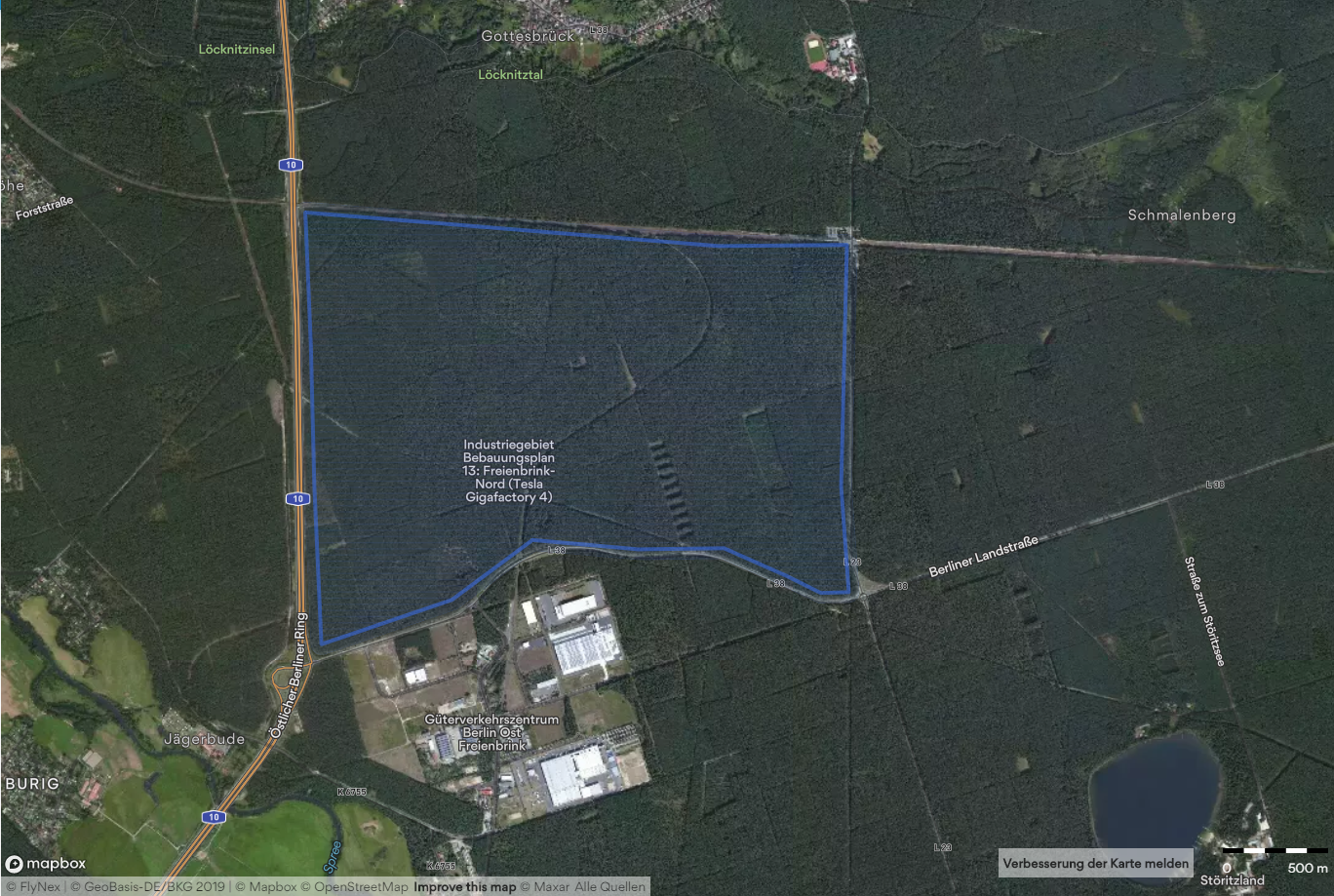 Two authorities are responsible for the area. One is the Ministry of Infrastructure and Agriculture of the State of Brandenburg; the other is the Berlin-Brandenburg Aviation Authority.

If you want to fly here, you have to consider the following things. You can also see all displayed regulations in our Map2Fly – free of charge and without obligation!

Part of the area is considered a control area. There, the following applies: A general operating ban applies from a flight altitude of 50m. If you want to fly above 50m, you need an operating permit from the responsible aviation authority. From a flight altitude of 50m, you must also obtain an air traffic control clearance from the accountable air traffic control authority, NfL 1-1197-17 must be observed. 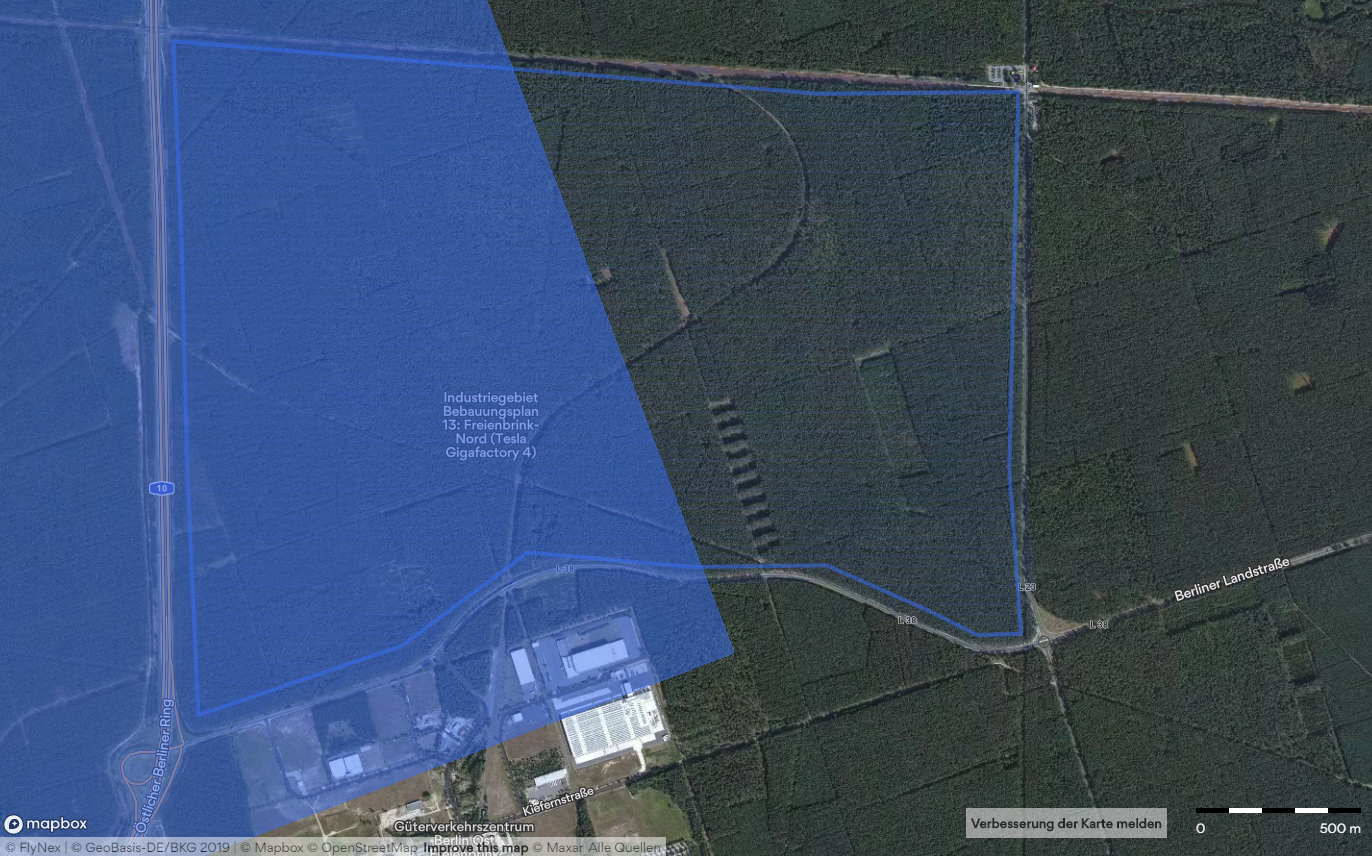 Keep a safe distance from the roads. Road traffic must not be obstructed. 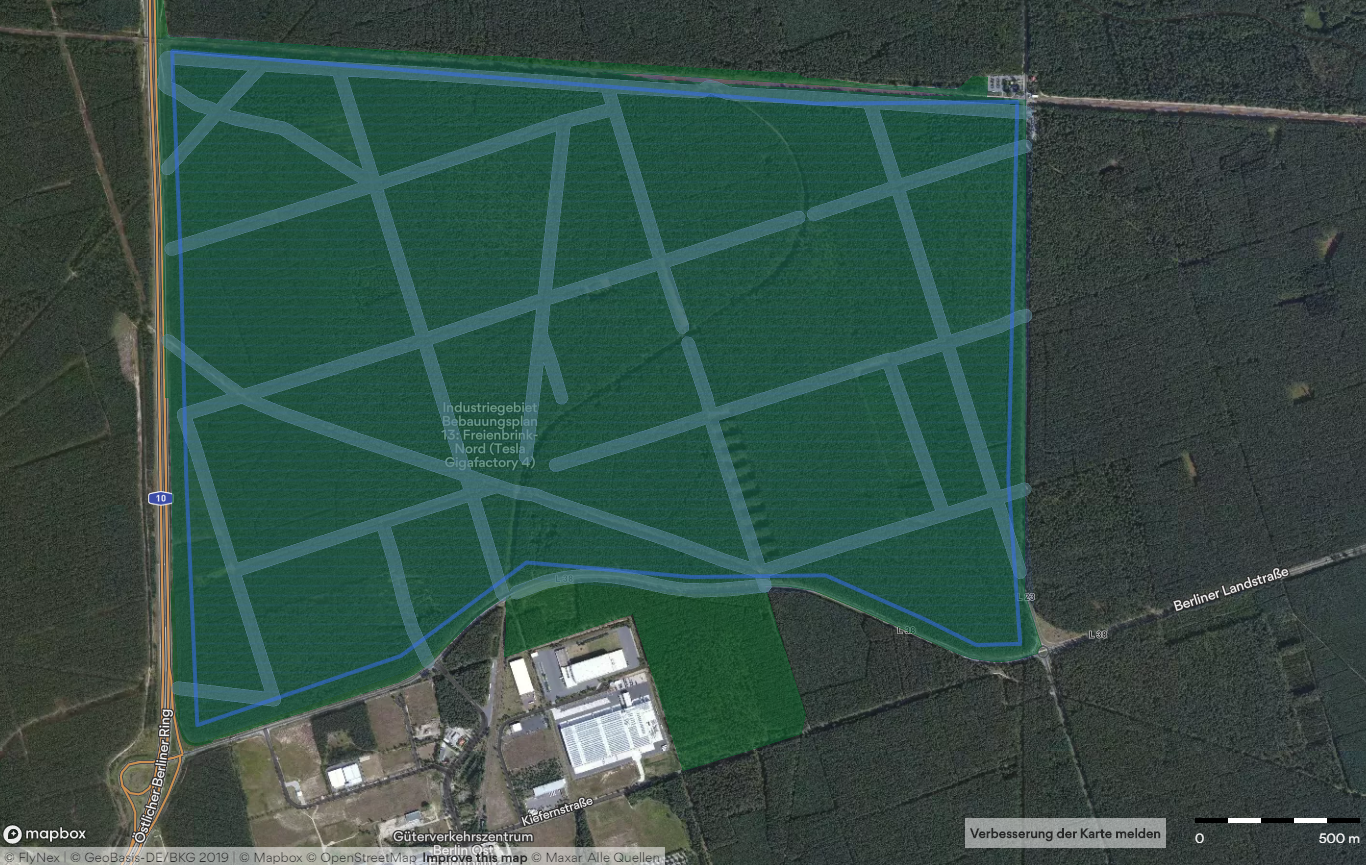 The same applies to public roads that lead through the forest. The forest itself is a forestry territory – therefore, the whole area is colored green. More on this later.

No flying over or around motorways for 100m without special permission. At the western edge of the area the A10 is located. So watch out here.

The curved path through the area with a blue background is a railway track. A circle is faintly visible in the upper right corner. This is the station Fangschleuse. Again, without special permission, neither the station nor the rails are permitted to be flown within a radius of 100m. 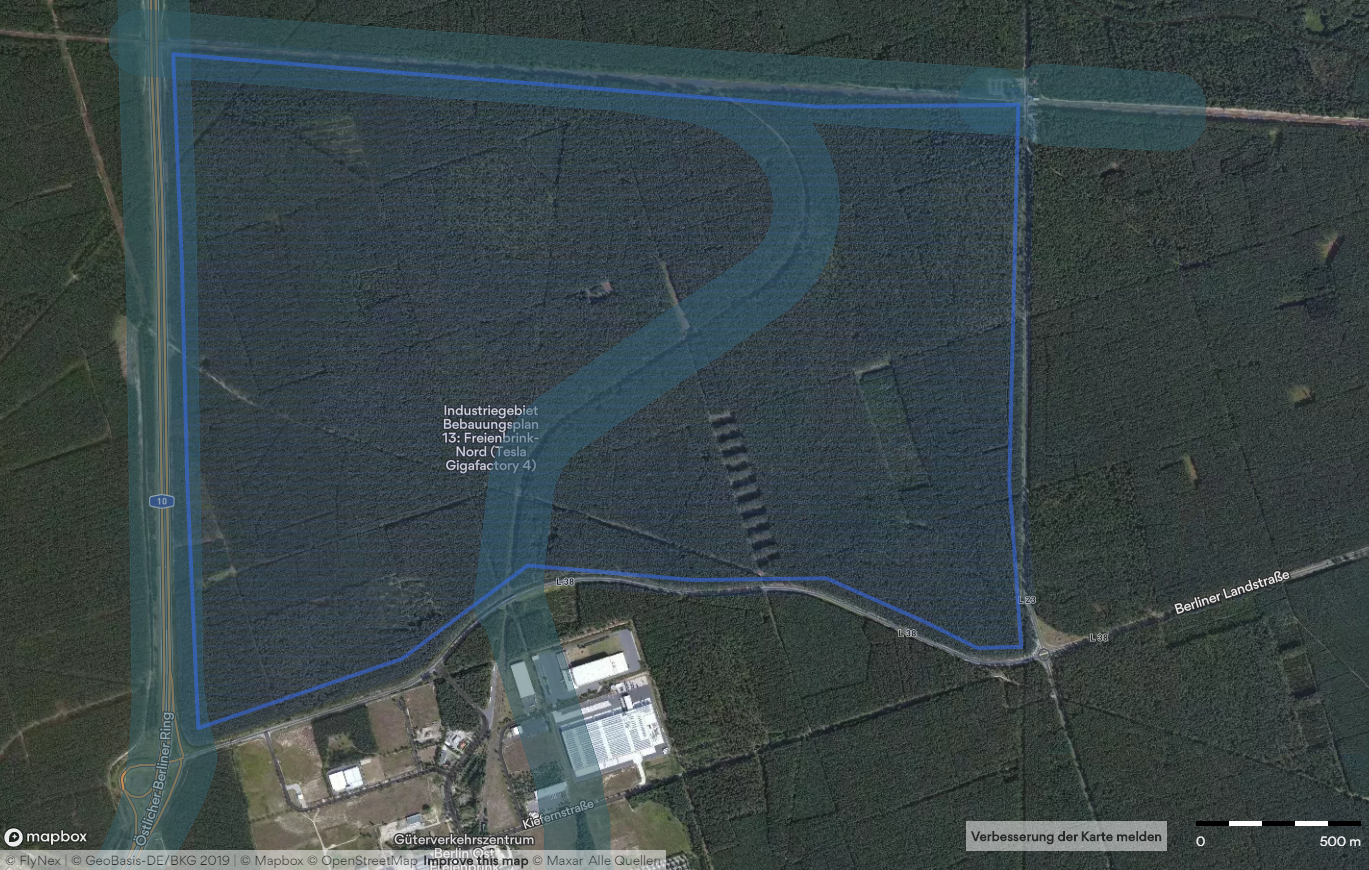 The green undercoating indicates: The area is a forest area. For take-off and landing, you need the public or private law approval of the respective landowner or person entitled to dispose of the forest area. 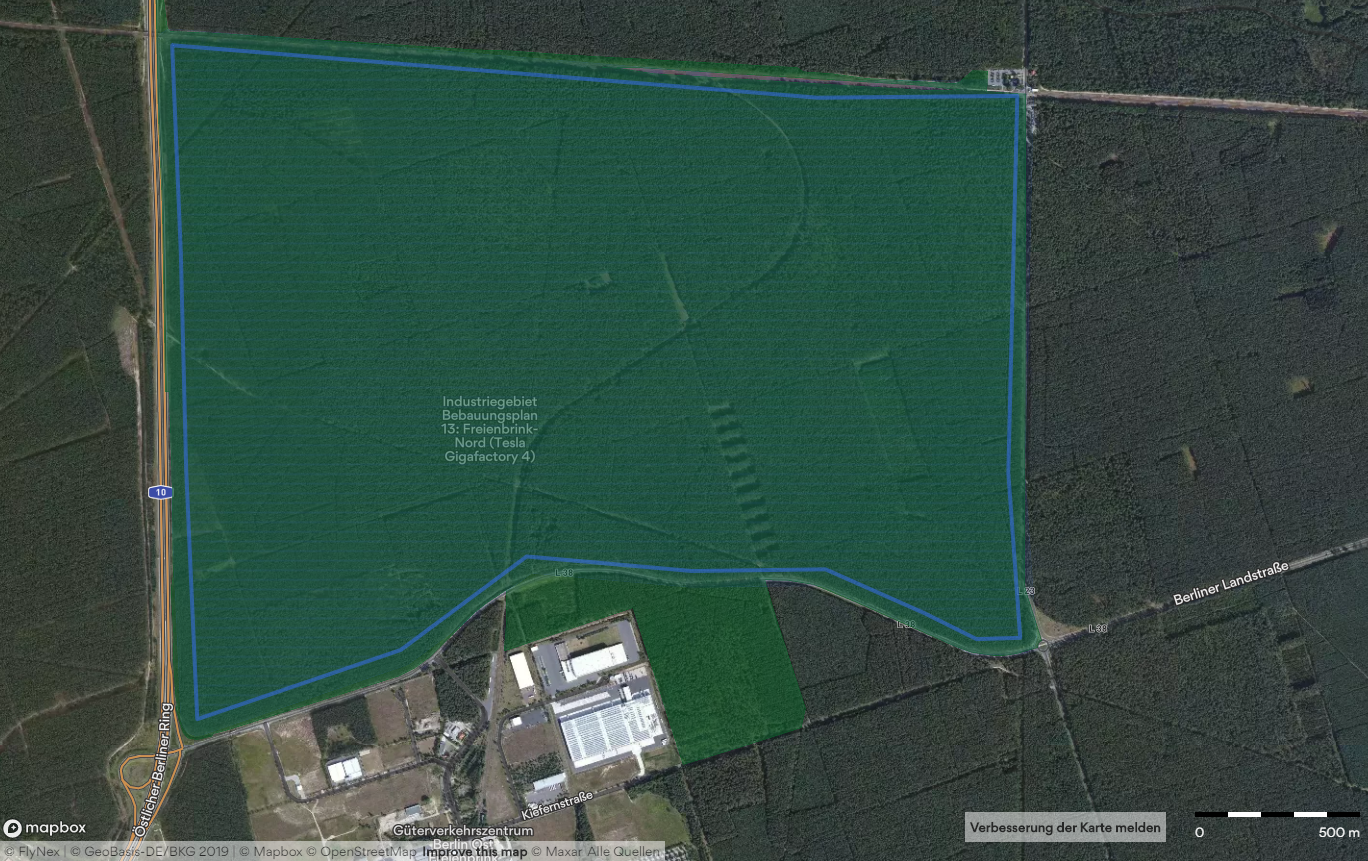 In addition the known regulations apply:

If you want to fly over the Tesla area, we recommend that you obtain a special permit from the relevant authorities. Use the risk calculator SORA GER (sorry, currently only available in german) for the application.

Who gets a permit?

In principle, anyone can apply to the authorities for a permit with the corresponding SORA and flight information. Permits can be requested by commercial and private UAV pilots. The principle of approval serves to minimize the dangers and risks posed by unmanned aircraft. To this end, the risks that could exist and the measures that could be taken to avoid dangers are examined. So if you want to fly as a private drone pilot, you should secure yourself and obtain a permit from the LuBB (Joint Upper Aviation Authority Berlin-Brandenburg) beforehand.

We hope we could help you and we wish you a pleasant flight!