Geodata – important facts for a future with drones

Geodata – important facts for a future with drones

Unmanned aviation systems, colloquially often called drones or copters, are legally assigned to aviation. Therefore it is relatively obvious to deal with aspects of aviation for the ascent with a device. For many pilots on the ground, this means dealing with airspace structures and airspace maps. However, that data represents only a fraction of what is actually relevant and important for flight planning: because valid geodata has a very special meaning.

Although the topic of drone flights is legally located in aviation, from an operational point of view the intersection for practicable procedures is negligible. Ascents with drones are rather a ground-based procedure in which airy heights are exploited. On the one hand, the operation is always controlled and monitored from the ground, on the other hand, the object of desire is located on the ground in more than 90% of the applications. Today, flying with unmanned aerial vehicles is all about obtaining high-quality data of ground-based structures and objects. Our infrastructure plays an important role in this.

The legal influence of infrastructure on drones is important

Of course, the infrastructure determines where and how drones are used for data generation, especially in commercial and industrial applications. It is precisely from these existing buildings, structures, traffic routes, and objects that data should be collected from for a specific purpose. The nature of the infrastructure has a significant influence on the type of drone and equipment used. For example, small specially designed drones can be used inside buildings, chimneys, ships, or in shafts, depending on the dimensions. For the visualization of buildings in the city, heights, distances, angles, and the dimensions of building structures are taken into account. It is obvious that this plays an important role, especially in collision prevention.

More important than the direct physical influence of the infrastructure on the drone is the legal influence of the existing infrastructure on airspace design. Especially in very low airspace below 150 m, our existing infrastructure creates a large number of airspaces, all of which are subject to conditions. These thus have an indirect influence on the rise of an unmanned aerial vehicle. To put it bluntly, existing infrastructure usually decides whether I can fly easily in a certain area or whether any operating bans or other requirements have to be observed. E.g. 100m around and above hospitals, there is a general operating ban. For take-off and a landing, you need the approval of the respective property owner. The structures created by humans on the ground thus entail all sorts of conditions that must be taken into consideration.

More than 97% of the requirements are influenced by the ground 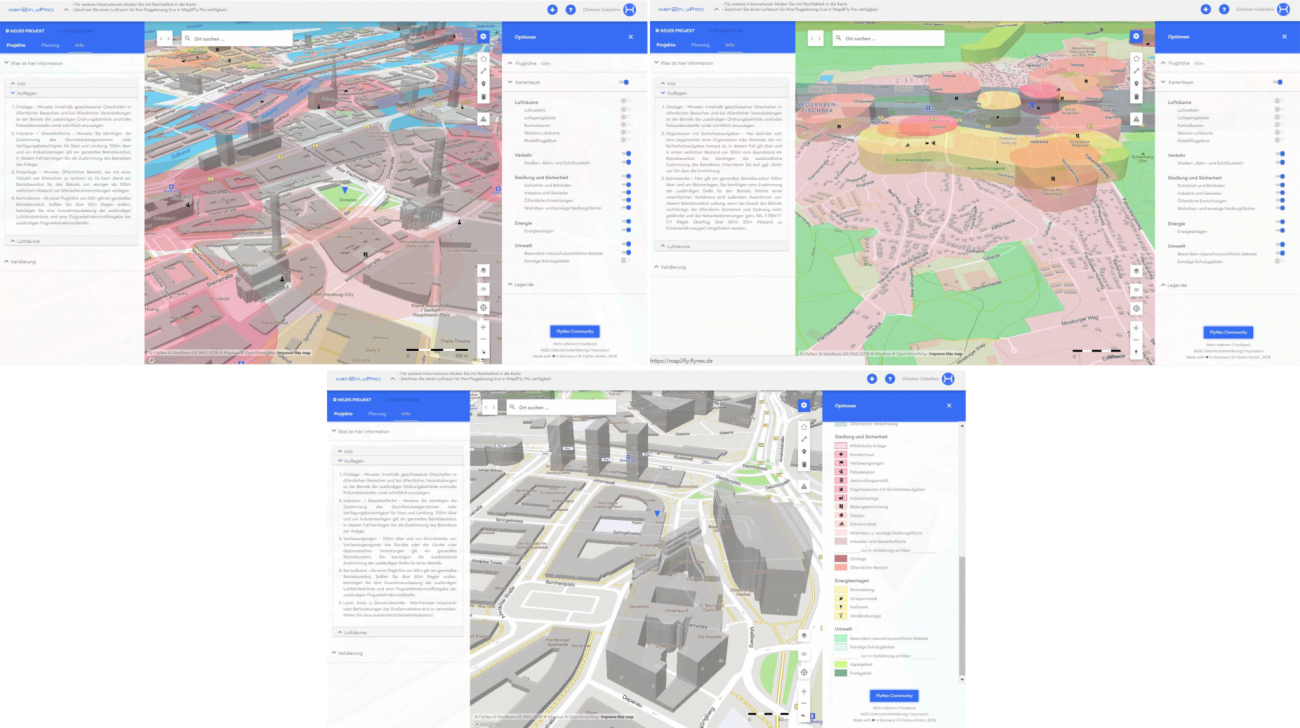 Why is valid geodata so relevant?

The reasons for these requirements are, of course, to be found in various areas of law, including property rights and personal rights. Nature conservation and noise protection requirements, as well as data protection issues, must also be taken into account. Because all these requirements serve the safety of people, road users, companies, and much more. The existing rules and laws are thus directly related to our existing infrastructure.

Now, however, it is important to bear the following facts in mind. In aviation in Germany, less than 10MB of airspace data is actually processed when a flight is carried out with an aircraft. Above our existing infrastructure, there are already more than 50 GB of available geodata describing our ground-based infrastructure. That data is two-dimensional, but that amount of data grows exponentially when the effects are extended into the third dimension. More than 97% of the ascents with an unmanned aerial system is influenced by ground conditions and only less than 3% of the conditions are actually due to existing airspace data and aviation laws. So in order to ascend with a copter, much more relevant geoinformation of the existing infrastructure has to be considered and processed than there has generally been the case in aviation so far. The information to be processed is multiplied by a factor of 1.000 in order to be able to map a reliable air situation image in the lower airspace. Without valid geodata on the ground, which represents the spatial structure, neither technologies like Geofencing nor future deliveries of parcels and packages can be realized safely.

The geodata for drone flights must be official, valid and applicable

The effects of valid geodata

In addition, there is the densification of infrastructure in urban areas, where 75% of Germans live. 31% of people in Germany live in cities with over 100,000 inhabitants. However, the majority of applications are located precisely within these urban areas. As a result, a large number of existing spatial constraints overlap and greatly increase complexity. For example, several operating bans can exist simultaneously at one point. E.g. if you find a power generation plant and an industrial plant near a motorway. But you first have to know about these spatial restrictions.

A major challenge is to have the various requirements and information at one’s disposal, to assess their relevance and to derive conclusions for the ascent. Since the operator of an unmanned aerial vehicle is obliged to obtain comprehensive information on existing requirements for its ascent, it must be possible to retrieve a large amount of relevant geoinformation. It must be possible to exclude irrelevant geoinformation, as this may not have any influence on the ascent. For example, there is a meta-information about the built-up area of private property. In any case, the geodata must be official, valid, and applicable so that a uniform situation picture exists and complete flight planning can be carried out in the first place. This requires not only raw data, for which numerous map service providers in Germany spend millions of euros, but also industry-specific know-how in the preparation, attribution, and maintenance of data in three-dimensional space. Only this way can geodata be used for unmanned aeronautical systems.

With valid geodata, it is not only possible to plan ascents, but also to develop navigation systems for future delivery drones and flying taxis. Geodata is even essential to process and orchestrate drone technology in traffic information systems in the future. For companies, geodata becomes relevant as a basis for planning operations and making economic decisions on the basis of this interface. Geodata is therefore relevant for all flight planning, no matter whether it is a matter of spatially limited ascents or flights from A to B. For this purpose, FlyNex already processes more than 80 GB of geodata with Map2Fly and provides 8.5 GB of relevant official data for flight planning. With GeoSphere, this unique, industry-specific data basis can be made officially available to companies to enable flights of all kinds in the new lower airspace in the future.