In the last part of our blog series about penalties for drone pilots, we discuss drone flights in airport areas, which is mentioned again and again in the media, as was the case in Frankfurt at the end of February. We also talk about flying over private areas and what there is to consider here in terms of privacy. Both cases are punished most severely of all offenses, which is why custodial sentences can be imposed here.

Therefore, below we clarify what you should know about no-fly zones, including areas with crowds and flying over other people’s properties. Finally, we have summarized all the information in a checklist.

If you missed the first parts of this blog series on drone pilot penalties, you can read them here:

Part 1: Flying without Certificate and without Permission

Part 2: Flying without Insurance and without Label

Currently still regulated in § 21b LuftVO – after the amendment of the law in the future in § 21h LuftVO (see p. 16) – there are certain areas in which or above flying is prohibited – so-called no-fly zones.

For the operation categories „open“ and „specific“, the following areas are prohibited, and the following distances must be observed:

However, there are also exceptions. These apply if the operation has been expressly consented to. A flight can then occur if you have obtained permission from property owners or hospitals (such as for our Medifly project).

If flying a drone constitutes a dangerous interference with air traffic because, for example, there is a risk of collision with an aircraft, a fine or imprisonment (6 months to 10 years) may be imposed according to § 315 StGB. You can also be punished with 3 points in Flensburg and the revocation of the driver’s license or the imposition of an isolated ban.

For the third operating category “certified”, § 21c LuftVO section 2 states that, due to their technical complexity and purpose of use (e.g., transport of persons, transport of dangerous goods), the traffic regulations for aircraft should generally apply to devices in this category. 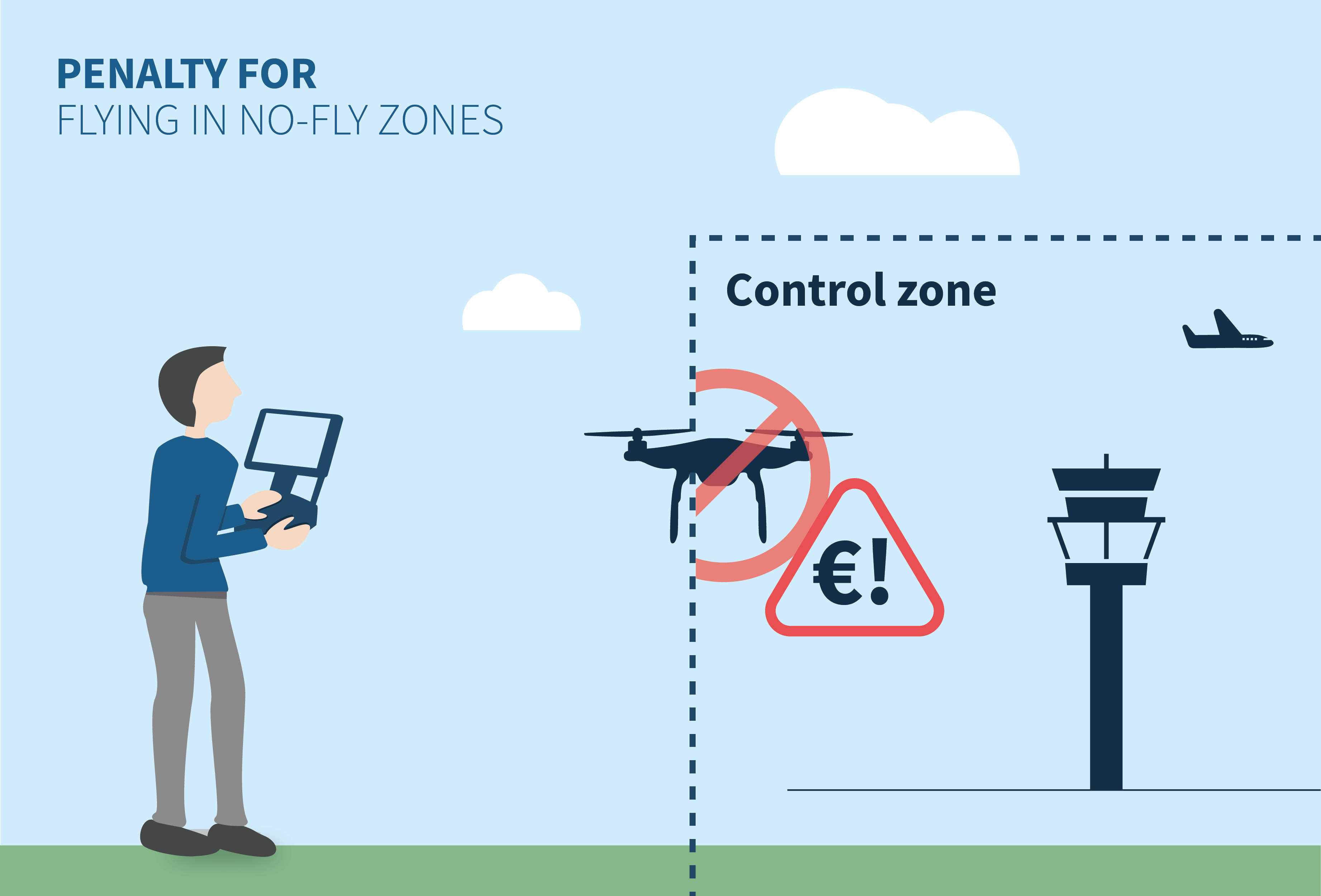 To prevent unauthorized flying in no-fly zones, geofencing can be used to create “virtual cages” in the airspace of areas where devices cannot fly or take off. Most devices already have this feature built-in. The City-ATM project, in which FlyNex is also involved, is testing the possibility of creating short-term no-fly zones, such as in the event of a fire.

To find out where no-fly zones are located, check our drone map Map2Fly at www.map2fly.flynex.de

Flying over crowds of people

Flying over crowds is determined by the various operating categories. Again, for the “open” and “specific” categories, there is an explicit prohibition on flying over areas with crowds of people. In the “specific” category, there may be exceptions under certain circumstances, but these require a permit in any case.

A real exception here is again the third operating category “certified”. Flying over crowds is permitted here if it involves special equipment designed to fly over crowds (e.g., air cabs).

But how are crowds defined in the first place? Unfortunately, there is no official definition. Guidance from EASA attempts this definition: “A crowd is when individuals are unable to move freely enough to avoid, for example, an out-of-control UAS at will.”

Always try to generously avoid crowds of people so as not to provide a basis for discussion. After all, you won’t endanger anyone if you can no longer control your drone for some unknown reason, and it crashes.

Flying over private areas without permission is prohibited. However, it is usually less about flying than about taking photos and videos of other people. But, this is not just an administrative offense under the German Air Traffic Regulations (LuftVO) but rather a criminal offense under the German Criminal Code (StGb) since it is a violation of privacy. 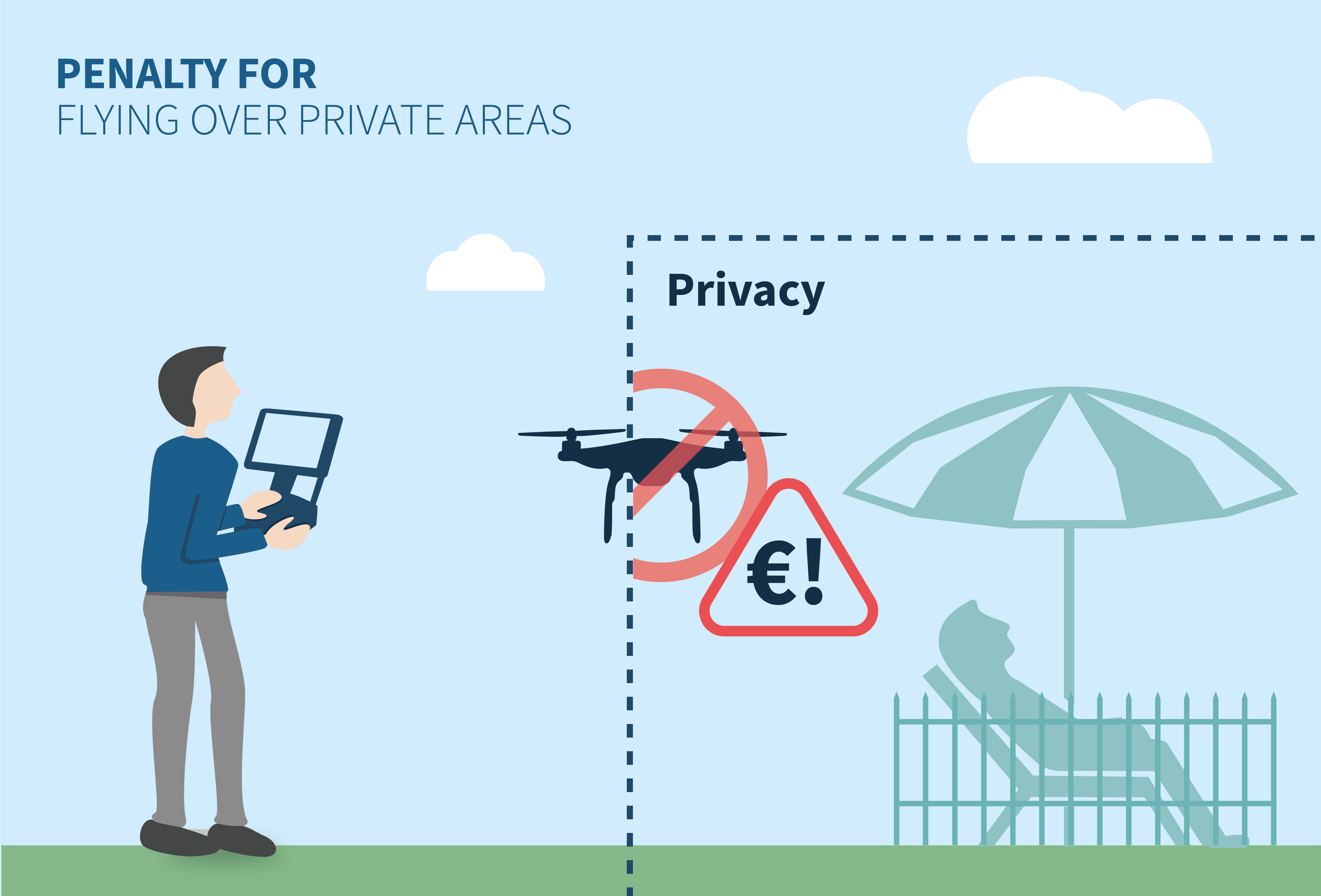 On the one hand, this refers to the unsolicited taking of photographs of a visible and identifiable person and his or her private sphere. On the other hand, it concerns the publication of these images.

If the drone operator cannot be located or does not refrain from operating the drone after being requested to do so, the property owner is even entitled to shoot down the drone following § 228 BGB to eliminate the imminent danger.

To not commit a violation or, in the worst case, a criminal offense, you should always obtain the permission of the filmed persons or owners of the residential properties.

Checklist: What do I need to consider before the flight?

All in all, it becomes clear how important it is to deal with the applicable regulations before flying, as they depend on many factors.

This blog article was the last part of our blog series on the topic of penalties for drone pilots (taking into account the current legal situation). On our blog, we will keep you regularly updated on everything related to the new drone regulations.

If you have any questions, please feel free to contact us at any time! We will be happy to help you!

We wish you safe flights,