In recent years, drones have become tools for professional applications all over the world. For this reason, there is an increasing international demand for uniform rules and laws to make the implementation of unmanned aerial vehicles as easy as possible for companies.

Although “unmanned” aircraft have been around for a long time, they are more likely to be used for private purposes. In contrast to flying models, drones are both technically more complex and much more versatile. The Swiss Federal Office of Civil Aviation (BAZL) describes the difference between flying models and drones precisely:

“UAVs are unmanned, remote-controlled aircraft that serve specific purposes such as image acquisition, surveying, transportation, scientific research, etc. It makes no difference whether the mission is commercial, private, professional, or scientific. In contrast to this are model aircraft such as model planes, model helicopters, etc. used for leisure activities. Here the execution of the flight and the pleasure of it is the main focus”.

Switzerland as a drone capital

The comprehensive knowledge that has been built up in research and industry on microtechnology and robotics pays off particularly well in the drone industry. Switzerland is at the forefront of this field in Europe and plays a pioneering role in drone technology.

It is not for nothing that the Swiss Federal Institute of Technology in Zurich and the École Polytechnique Fédérale in Lausanne are known as a Drone-Valley. Large software and hardware companies and the 80 or so drone start-ups that have emerged in recent years have a positive influence on the commercial use of drones.

According to a 2018 study on the “size of the commercial UAV market”, Switzerland ranks fourth in a European comparison (absolute market size).

Sales are also rising steadily. For the year 2021, sales are forecast to reach 2400 units. 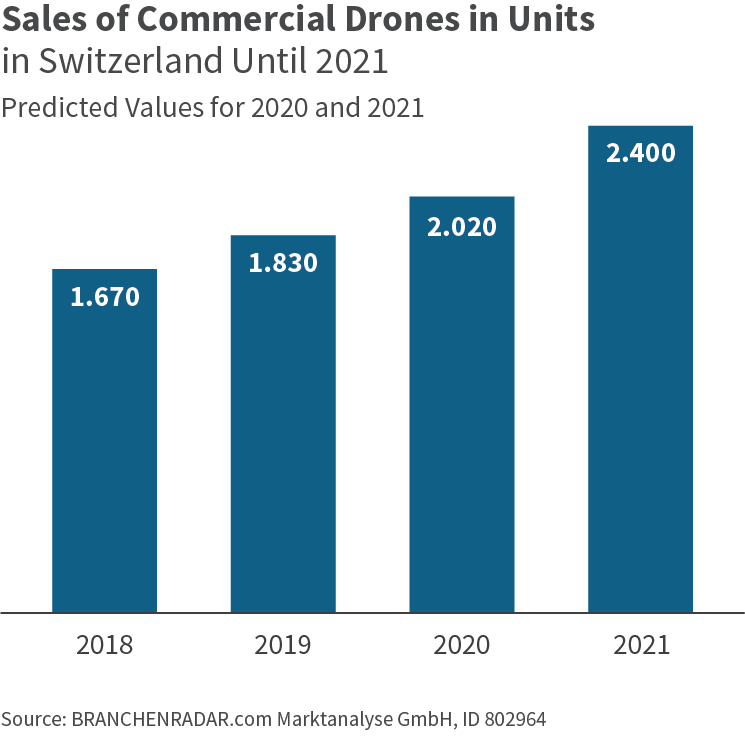 In relation to “market size per employee”, Switzerland was number one. This does not change in international comparison. Switzerland came first, followed by Norway, the USA, and Australia. A significant factor in this development: Increasing costs and workload in inspection and maintenance make drones an efficient alternative. The flexible use in construction, energy, agriculture, and real estate maintenance is a central argument for drones as tools.

From planning, to flying, to the evaluation of the collected measurement and image data, drone missions can be easily managed centrally. FlyNex has built up a digital solution for companies and professional applications over the last few years, which has been expanded by its own management platform and interfaces.

Our UAV map Map2Fly shows where in Switzerland which rules and laws for UAV flights apply. Besides, the desired flight areas and routes can be drawn easily and checked for possible restrictions with a “What’s here?” query.

We wish you safe flights,
Your FlyNex Team